Object Lessons: Jay DeFeo Works on Paper from the 1970s

galerie frank elbaz Dallas is proud to present Object Lessons, an exhibition of 40 works on paper from the 1970s by Bay Area native Jay DeFeo (1929-1989). Running concurrently with a major survey of her work, Jay DeFeo: The Ripple Effect, at Le Consortium in Dijon, France (Dallas’s sister city) and Outrageous Fortune: Jay DeFeo and Surrealism at Mitchell-Inness & Nash Gallery in New York, the Dallas exhibition is an important contribution to the current examination of DeFeo’s work and its impact on contemporary practice.

DeFeo was a pivotal figure in San Francisco’s historic community of artists, poets, and jazz musicians. In the aftermath of her celebrated monumental painting-cum-sculpture, The Rose (1958-1966, now in the collection of the Whitney Museum of American Art), DeFeo turned to the more intimate trappings of her studio, things like the camera tripod and compasses that are the focal points of this exhibition. What began as a chance incident (the hanging of a damaged drawing on her tripod) eventually became a relentless investigation of the multiple ways a single object could be graphically represented. These permutations employed everything from traditional media like graphite and ink to more mechanical means such as photographs and photocopies. As DeFeo remarked in a 1979 interview: “As the years go by we take these various symbols and re-state them, make new sentences and new phrases and new ideas out of them.”

This diversity of means speaks to a broader trend in the contemporary art of her moment: namely, the influence of the work of Marcel Duchamp. DeFeo’s encounter with this legacy had begun in the artistic milieu of San Francisco’s Beat culture. She frequented 6 Gallery, which staged Allen Ginsberg’s reading of “Howl” in 1955, and was close to Walter Hopps, the legendary curator of shows for the Ferus Gallery in Los Angeles and organizer of the pivotal Marcel Duchamp retrospective at the Pasadena Art Museum in 1963. But whereas her good friends Wallace Berman and Bruce Conner would gravitate towards film and multi-material assemblages, DeFeo pursued a line of development incorporating both the industrial and the gestural. Works like Untitled (Tripod series) of 1975 (E1182) and the 1973 photocollage Untitled (E2338) clearly harken back to the anthropomorphic machines of dada and surrealism. But they refuse to forsake the hand of the artist altogether. Over and over again the tripod and compass series reveal the stages of a working process that accepts and even cultivates the accidents of everyday activity.

Sometimes it’s a photograph that is cut and re-pasted into a drawing; sometimes it’s drawing overlaid onto a photocopy; sometimes it’s a drawing with the color and tone of something more mechanically reproduced. A vitrine of archival materials as well as a catalogue with selected images and an introductory essay by Paul Galvez will further document DeFeo’s highly individualized response to our increasingly instrumentalized world.

Jay DeFeo (1929-1989) grew up in the San Francisco Bay Area and attended the University of California, Berkeley, receiving her master of fine arts degree in 1951. With a fellowship from the university, she traveled to Europe and North Africa in 1951 and 1952, creating her first body of mature works there. Returning in 1953, DeFeo became a pivotal figure in San Francisco’s historic community of artists, poets and jazz musicians. In 1958 DeFeo began working on The Rose, a monumental work created over eight years, with so much oil paint that she called it “a marriage between painting and sculpture.” In 1959, she had a major solo exhibition at the Dilexi Gallery in San Francisco and her art was included in Dorothy Miller’s momentous exhibition Sixteen Americans at the Museum of Modern Art in New York. Ferus Gallery in Los Angeles mounted her next solo exhibit in 1960. After completing The Rose, DeFeo began investigating new materials and became deeply involved with photography and mixed media works, pursuing these in the 1970s. Often her subjects were favored domestic oddities, which she transformed into images that, in her words, “transcend the definition of the objects from which they are derived.” In the 1980s, DeFeo returned to oil paint, while still continuing to mix and assemble materials in her work, creating large, glowing canvases and an expansive scope of works on paper. She accepted a teaching position at Mills College, where she became a tenured professor. DeFeo was diagnosed with cancer in the spring of 1988, but continued to work prolifically until just before her death on November 11, 1989, at the age of 60.

Object Lessons: Jay DeFeo Works on Paper from the 1970s is Paul Galvez’s third curatorial project for galerie frank elbaz following the group exhibitions Meandering, Abstractly (2017) and PARIS TEXAS (2017). Galvez holds a PhD from Columbia University and is a Research Fellow at the Edith O’Donnell Institute of Art History, where he works on modern art from the nineteenth century to the present and is completing a monograph on the landscapes of Gustave Courbet. His writing has appeared in journals such as Artforum, Cahiers d’art moderne, and October as well as in several monographs: Courbet: A Dream of Modern Art (Schirn Kunsthalle, Frankfurt, 2011); Martin Barré: the decisive years (Éditions Dilecta, Paris, 2013); Brice Marden: Graphite Drawings (Matthew Marks Gallery, New York, 2014); Davide Balula: Ember Harbor (Shelter Press, 2014); and Bernard Piffaretti, Works: 1986-2015 (Karma, New York, 2016). 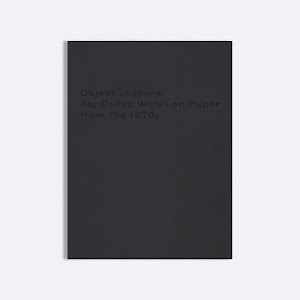